Among the graves at the Linton Hall cemetery, one stands out from the others.  It is the grave of Eduardo Facha García, a cadet born in 1944 and who died in 1954 at Linton Hall Military School.  I do not know whether he had already reached his tenth birthday.

It is always a tragedy when someone so young loses his life, made even worse by the fact that he was from Mexico and died so far away from home.

I have not been able to find much information about him, or how long he had been at Linton Hall Military School before he died.  He arrived to Idlewild (now JFK) Airport in New York City on June 14, 1954 from Mexico City.  He had a sister, Raquel Facha García (her name would have changed if she married) who was a year or two older, and probably a younger sister, named Maria Teresa.  His mother's name could have also been Raquel. 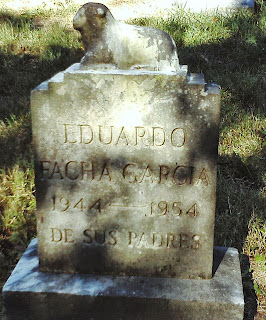 If any of his family sees his grave, I would like you to know that it is in good condition and well maintained.

(I have found a different, likely unrelated Eduardo Facha García, on the Internet.)


--------
Copyright 2013 "Linton Hall Cadet"
Please respect copyright by linking to this post instead of just copying and pasting. Thanks!
This blog is NOT affiliated with Linton Hall Military School. The opinions contained are those of the author.
Posted by Linton Hall Cadet at 10:46 AM